Jimmy Kimmel Displays The New Power of Having Followers 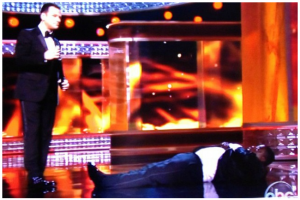 Even if you didn’t tune in to watch the Emmy’s last night, you’ve likely heard about host Jimmy Kimmel’s little prank with fellow comedian Tracy Morgan. And we’re pretty sure, he just clearly demonstrated the new power of having a strong following, online and elsewhere.

During the show, the Jimmy Kimmel Live host instructed viewers to tweet “OMG Tracy Morgan just passed out on stage at the Emmys, turn ABC on now!” Kimmel then instructed Morgan to lie down on stage so that folks tuning in would see him lying there and subsequently re-tweet what they’d learned. To no surprise, the whole thing worked. In fact, the subject began trending worldwide almost instantly, with Twitter TV announcing, “OMG 25,000 tweets instantly thanks to OMG Tracy Morgan Emmys.”

So while the actual prank may or may not have been in bad taste, one thing in unquestionable: Kimmel appropriately represented the power of the creator in generating serious buzz. With Google’s new AuthorRank soon taking authority on the web, the same will be true for each and every content creator.

Is your online social circle big? Do a lot of people know who you are and follow your content with interest? Then, like Jimmy Kimmel, you’ll get a strong response in regard to your content’s Google ranking. However, if you remain inactive in regards to social networking sites like LinkedIn, Facebook, Twitter, and especially Google+, you’re content will likely fall flat. So if you’re not an active member of the online community but you intend on starting or maintaining a successful blog, you’d better get moving. You needed to make meaningful connections yesterday!

B2B Marketing Agency
About Us
Our Team
Careers
Contact

This website uses cookies to improve your experience while you navigate through the website. Out of these cookies, the cookies that are categorized as necessary are stored on your browser as they are essential for the working of basic functionalities of the website. We also use third-party cookies that help us analyze and understand how you use this website. These cookies will be stored in your browser only with your consent. You also have the option to opt-out of these cookies. But opting out of some of these cookies may have an effect on your browsing experience.
Necessary Always Enabled
Necessary cookies are absolutely essential for the website to function properly. This category only includes cookies that ensures basic functionalities and security features of the website. These cookies do not store any personal information.
Non-necessary
Any cookies that may not be particularly necessary for the website to function and is used specifically to collect user personal data via analytics, ads, other embedded contents are termed as non-necessary cookies. It is mandatory to procure user consent prior to running these cookies on your website.
SAVE & ACCEPT
Contact Us